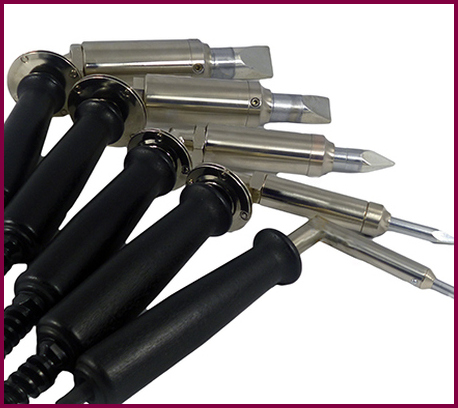 There are lots of fun ways to strain your wrist...don't let soldering be the cause of your pain

An exacting laser cut followed by a precision brazing operation turns our heavy-duty soldering iron into an Ergo Iron. Soldering all day can be a real challenge. Workers have to deal with the heat, the fumes and the weight of the soldering iron itself, often over 3 pounds. The near 90 degree angle of this irons' casing allows the operation from an ergonomically comfortable position. We developed the Ergo iron to make it a little easier by reducing the tension on operator's hands and wrists. We felt it was the least we could do.

The irons perform to the same exacting standards as our straight heavy-duty soldering irons and are covered by the same warranty.

If its been a while since you've done something 'sweet' for those hard working folks on the shop floor, try an ergo iron the next time your restocking your company's soldering iron supply. They will be grateful you did.

From your soldering irons, soldering tips, to having an actual live person that answers the phone...I'd like to thank everyone at American Beauty Tools. Having spoken yesterday with Kim about how my passion has been found at the age of 52, from always having had the desire to do Stained Glass, to finally buckling down to do it. After going thru many soldering guns and tips, I finally found you and one thing is for certain - yours is a company I will keep on speed dial.